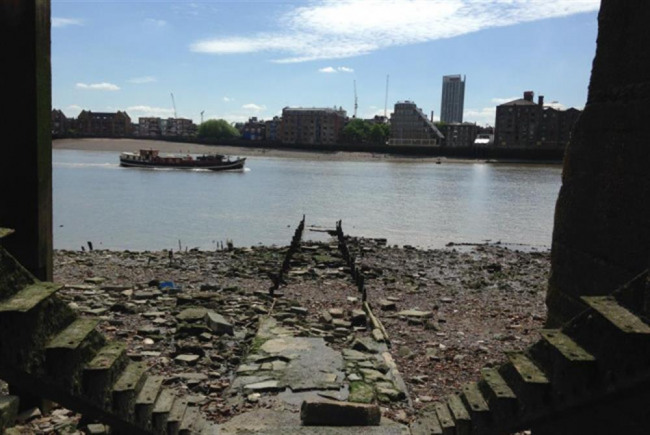 Save Wapping Dock River Stairs will restore the historic and derelict river stairs next to Wapping Station and in doing so will reinstate a lost access point to the Thames foreshore.

Save Wapping Dock River Stairs will restore the historic and derelict river stairs next to Wapping Station and in doing so will reinstate a lost access point to the Thames foreshore.

We want to restore Wapping's historic river stairs. From the 1500s until the 1960s the river stairs were an integral part of this maritime area just east of Tower Bridge. The closure of the London Docks in the 1960s meant that the stairs, which had been used by Watermen until the 18th century and more latterly by dock companies, fell into disrepair. We want to stem this neglect and get the stairs back to an acceptable safety level to enable public access to the dazzling and intriguing Thames foreshore. While most of the stairs have disappeared, the risk to the heritage of Wapping is that the lack of access has caused a disconnect in peoples’ memories of Wapping before it became a chiefly residential area. We want to re-connect the historic relationship between Wapping and its river heritage. Restoring this river staircase we hope will be the first of many as it is part of a larger project to restore and repair all 9 of the river stairs in Wapping.

The Thames foreshore is a major public open resource that deserves to be better celebrated and cherished. Yet, restrictions on rights of way and the neglect of river stairs are eroding our ability to access the foreshore. Improving and protecting foreshore access will not only celebrate London’s heritage, but will allow Londoners to reconnect with the ecology and life of their river and to experience nature in an unexpected and enduring way. Also, for centuries people from Wapping either worked on the river or were associated with the docks and the river was a major part of their lives. Since the1960s this relationship has steadily been neglected as gates have been placed across unsafe staircases. This project will begin a new connection.


Wapping River Stairs Project is a community focused urban regeneration project that aims to increase public appreciation of London’s principle river. We believe community-evolved solutions should be at the heart of urban planning. Collaboration, inclusiveness, and commitment to social and environmental sustainability will be at the heart of this project. The project will initially focus on the Wapping Dock river stairs, which are next to Wapping Overground station. Blocks of flats have truncated the Thames Path from the riverfront along this stretch of the river cutting off communities from river access. Restoration of the stairs and improved way finding will enable and encourage people to rediscover and reclaim their river foreshore.