A Covid-safe visual and audio art installation and planned season of curated events in Dalston Square that connects the CLR James Library with the public and the public with the delight of words.

A Covid-safe visual and audio art installation and planned season of curated events in Dalston Square that connects the CLR James Library with the public and the public with the delight of words.

'First Words in Dalston' was launched in February 2021 and will run until summer 2022. People have been invited to contribute the first sentence from any publication by sending photos of the text and a recording of themselves reading it. This material has become the content of a Covid-safe visual and audio art installation on the east end hoardings erected within Dalston Square, London. In late spring we will incorporate new material supplied by local schools, residents of the square, library staff, youth groups and many others on the remaining hoardings of around 200m. This installation will be completed summer 2021. Our Spacehive project is a shout out to the crowd to join in contributing first sentences and to raise money for the project management and curation and delivery of regular Covid-safe public activities by diverse people/organisations around the art installation in the square.

Create an opportunity for many people and organisations to participate in cultural and creative activities and events in a Covid-safe way. Promote a sense of community connection. Create interest and delight during what is essential a very large and dull construction project. Inspire passersby with chance encounters. 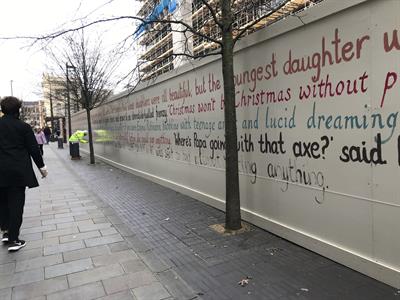 Hi Now that spring is in the air and the weather's better, we've been busy adding more of your first sentences to the hoardings in Dalston Square. We've just taken delivery of various bits of technology so the sound installation, of people reading their sentences, will be live early April. Sadly, our ask for £4915 from the Mayor of London for running a series of eight events around the square was not successful. It seems that he was inundated with requests for backing – apparently to the tune of £2m when there was only £500,000 to dish out, so lots of worthy projects will have also missed out. Frankie and I have decided that rather than spending time and energy trying to raise the outstanding money and then put on the events, we will use that time to actually curate and host an initial event in the summer and we’ll see what happens after that! I’ll keep you posted with details as they emerge. Obviously if you want to pledge more to take us to our ask – that would be amazing! But please be reassured that your generous pledge will only be collected if we reach our project target! If you haven't sent us your first sentence, please do. We've installed around 70m and still have another 18m to go. It's really simple, just follow this link https://firstwordsindalston.co.uk/take-part/ And finally, if you fancy backing another amazing project (I’m involved with this as well) please check out the Common Rooms for Clapton. https://www.spacehive.com/the-common-rooms-for-clapton Very bestest and thanks again Mike and Frankie

I'm blown away by your generous support. Thank you so much. I was on site today with Frankie, painting more texts on the hoarding, so if you haven't contributed your first sentence, please do so... It's really easy – just follow this link for the simple instructions. https://firstwordsindalston.co.uk/take-part/ What's so great is that passers by are stopping and reading the wall, and then opening their bags and sharing a sentence from a book they're reading. Makes us so happy! Thanks again and spread the word Mike and Frankie

92%
Project management by artists for curatorial and delivering min 8 events. Plus some expenses
£4,500
8%
Other Read More
£415 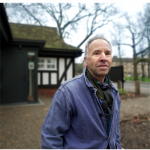 Mike Abrahams is a graphic designer and artist and has spent the last seven years establishing and participating in a local charity called Clapton Commons. He has led the £250+k development of Liberty Hall, a project to convert a disussed toilet block owned by Hackney Council into a space for all, a village hall, community cooking school, coffee kiosk, cycle repair station, community garden... The project secured almost £50k via Spacehive in 2018/19 and throughout the build the hoardings around site were used as a community notice board, and to communicate and engage the community, initially thanking everyone who had particiaped in making it happen and then into a memori-wall to celebrate the lives of neighbours who had died during the first lockdown in 2020 establishing new traditions for grieving.

Mike's art practice is an exercise in going beyond the given and against the grain, exploring the creative process itself as an opportunity to deconstruct the world around us and the way that we behave within it. He makes interventions into that which is often banal to the point of invisibility, exposing and unravelling the wiring that lets us see only that which we wish to see, encouraging a more conscious relationship to our surroundings.

Francesca Giuliano is a contemporary artist based in London. She works in a variety of traditional media (mainly paint and drawing) as well as in digital, moving image and sound.

Trained as an Experience Designer with a particular bent for cognitive psychology, her practice focuses on perception, comprehension, decision-making, error and action. Among her key questions are: how might a thing be interpreted, and how do different versions of a thing help build a single understanding?

At the core of Giuliano’s process is the push and pull between creating by design or by intuition. Between making work that is considered versus working without thinking. Between engaging the conscious or not. That tension informs the materials, the means of production and the techniques used.

Project Owner: Mike Abrahams The Project Owner takes legal responsibility for receiving and spending the funds raised and ensuring the project is delivered.

Contractors: Mike Abrahams,SweetP Ltd The team responsible for building or installing the project.