Phoenix Outdoor Kitchen will bring people in the local community of White City together, acting as a social magnet, to cook and enjoy FREE healthier food.

Phoenix Outdoor Kitchen will bring people in the local community of White City together, acting as a social magnet, to cook and enjoy FREE healthier food.

The farm is currently used by over 500 people per week, all from the local community of Wormholt and White City. All the activities that we provide are free, reflecting local depravation.The Outdoor Kitchen will provide a new dimension to the farm, allowing us to grow and cook local produce with the residents and help make the community a healthier place. We will run evening and weekend cookery classes, festivals, open evenings, Youth Club cooking activities, cooking with different community groups and cultures. The project will be run using volunteers assisting the full time time community Food Grower and Nutritionist.

Currently there is a problem with obesity and unhealthy eating within the school and the community as a whole. There is no supermarket on the estate and the only food eateries are a fried chicken shop and a traditionally fried food English cafe. On entry to school in year 6, a quarter of students are classified as obese, with child dental health also being worse than the national average.

Residents in Wormholt & White City have poorer general health compared to both the borough and London averages, with 32.5% reporting not good health. A further 17.1% of residents are suffering long term illness, this is also 4% higher than the borough as a whole. 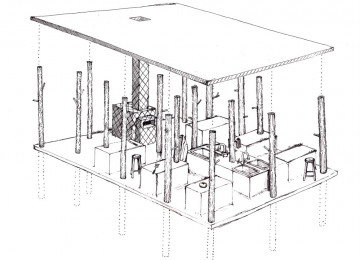 The Phoenix Farm & Learning Zone provides a unique external learning area to facilitate the cultivation of healthy eating and arable farming knowledge within the school and local community, whilst providing a positive surrounding for all Phoenix High School members.

Phoenix High School is a secondary school in the London Borough of Hammersmith and Fulham with an intake of 962 pupils from 11 to 19 years. The school is located in the White City Estate W12. The Wormholt and White City ward has 28% of it’s residents aged under 18, compared to a borough average of 19% and is in the top 5% of most deprived nationally with regard to income levels and the top 10% most deprived with regard to barriers to housing and services. The school serves a culturally diverse community, with 81% of students residing on White City estate from BME backgrounds . Students start in year 7 with levels of prior learning that are significantly below that typically found nationally. Many also arrive after the traditional start of the school year; about a tenth are refugees or asylum seekers. Around 65% of the students speak English as an additional language, about a tenth at the early stages. Almost two thirds of students have learning difficulties and/or disabilities, the largest number being those with behavioral, emotional or social difficulties with an overly high 58.6% of pupils are on free school meals. White City is a deprived low income area, and 61 different languages are spoken with Arabic, Somali and Polish being the three main languages.

Phoenix Farm and Learning Zone is regularly used by pupils at Phoenix and surrounding schools in White City. The Learning Zone is fully equipped with tables and benches so that teachers can bring class room activities to the farm. We have a full time food grower that looks after the farm and some of the grown produce is sold at our local food co-op or used in the school kitchen. We work with many local community groups, such as QPR in the community, Somali Women’s group, Nubian Life, Broadway, Urban Partnership group and other local people who volunteer on the farm.

Contractor: Lambs Flooring The team responsible for building or installing the project.