To offer contemporary non classical music to disaffected young people through a short course (10 weeks) with a locally respected creator and performer. The students will learn to write, record and perform Rap music in its many guises that is relevant to them

Western classical music will only ever be attractive to a a given portion of the student population. Rock and Pop music will attract another range of pupils, but for the bedroom/self taught musicians, Rap music in all its guises may well be the vehicle of choice for their musical outlet. Currently we do not have an offer for these young people, and this project addresses this void. This project will target disaffected students - those who traditionally are not catered for by 'traditional' music hub offerings such as western classical music, Rock 'n pop projects and (certain) world music offerings. 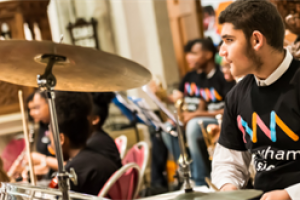 Walsall Music Education Hub provides musical opportunites to over 5000 children and young peoploe in and around Walsall in the West Midlands.We serve one of the UKs most deprived areas, yet offer a rich and varied programme of regular ensembles and music events, catering for a wide range of our community.

In our bid to reach more children and young people than ever, this project aims to engage the disaffected, those that find no interest in our regular musical offerings and to support children in care through such social programmes as this new contemporary music project.

Contractor: MC Vital The team responsible for building or installing the project.