By The Boundstone Chorus Lancing Delivery 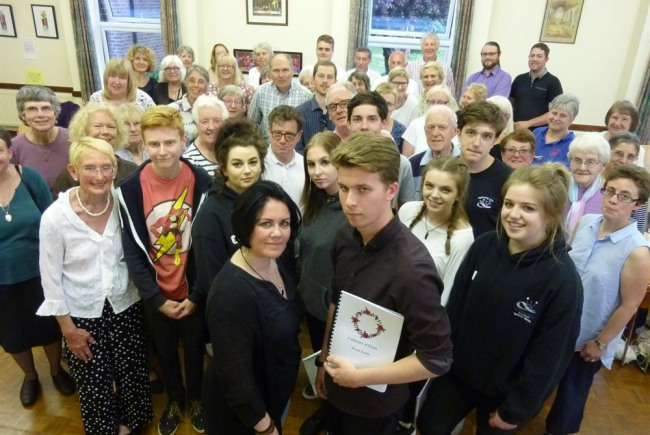 By The Boundstone Chorus

Help create a historic musical about smuggling in Sussex and Lancing. We will involve our whole community, bringing them together through theatre & providing education on local history in the process!

Help create a historic musical about smuggling in Sussex and Lancing. We will involve our whole community, bringing them together through theatre & providing education on local history in the process!

We want to involve as many members of our community as possible in this exciting venture, potentially 200 as performers, 600 as audience and 500 as part of our community-engagement programme of talks, discussions and workshops. We already have the commitment of three large performing groups: The Boundstone Chorus, Sir Robert Woodard Academy and Sompting Village Primary School. We hope that many more individuals and groups will join us in this project. Creating our Smuggling Musical from scratch, we will involve instrumentalists, singers, actors and dancers working towards two exciting performances. Our experienced creative team is led by Aedan Kerney MBE - Musical Director; Charlie Olsen – Researcher and Scriptwriter; Christopher Hussey – Composer; We need your help! Even £2 would go a long way. In our imagination we can hear the songs, see the smuggling characters from the past and feel the tingle of guilty excitement. Let the songs, characters and excitement be yours as well!!

We all have a romantic attachment to the idea of being a smuggler. In the 19th century smuggling was a part of daily life along the South Coast. We want these long-gone days to come back to life, mixing historical fact with creative imagination. We will bring performers from seven to eighty-seven together to create an amazing community show. We have an excellent track-record. Three years ago we performed "To Harvest the Dream" (the story of Lancing between the wars) to capacity audiences and last year performed our original "Catherine of Eyam" which traced the moving story of the plague village in Derbyshire. This is a great idea because: +It will involve up to 200 performers of different ages +It will enrich the lives of everyone taking part, either as performers or audience +It will make the past come alive and give people living in Lancing a greater affinity with the place where they live +It will be great fun +It will build on Lancing's tradition of great musical performances 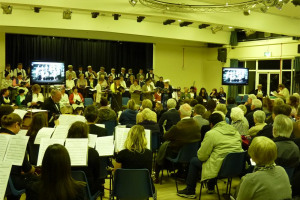 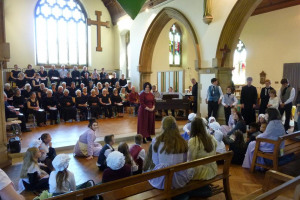 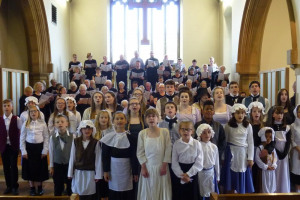 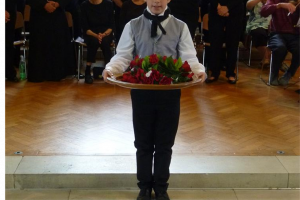 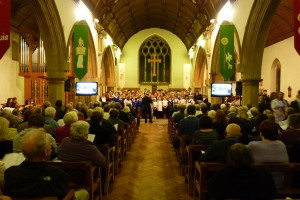 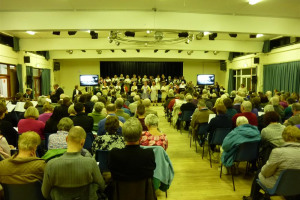 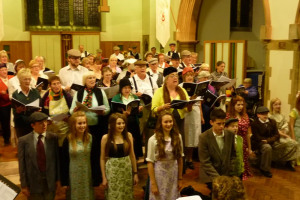 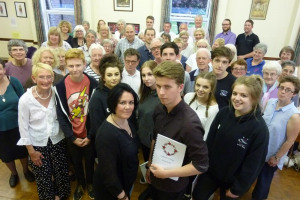 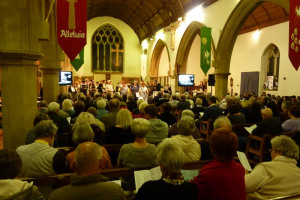 Lancing Smuggling Musical Update Sunday 1 September 2019 “BEWARE THE MACKEREL SKY” words by Charlie Olsen and music by Christopher Hussey “Awesome” – the comment from one of the audience at the “trailer performance” in June. We are now at a really exciting point in the Lancing Smuggling Musical Project. The musical, “Beware the Mackerel Sky”, has been completed and the vocal scores will be delivered to us tomorrow. The final version of the Script is being completed and will be printed later this week. Our rehearsals begin one again this week. The potential of this musical was clear from the “trailer performance” in June. We have an amazing team of performers. Among the leading solo performers are Matthew Ayling as Parson Wood, Sidonie Winter as Mrs Anro, Ian Tout as Magistrate Hawke and Annabel Venn as Abigail. The three groups – The Boundstone Chorus, the Sir Robert Woodard Academy and Sompting Village Primary School are in very good shape as they begin rehearsing after the summer holiday. . We are now looking forward to two performances of the completed musical in November. These are at 7.30pm on Friday 8th and Saturday 9th November at St Michael and All Angels Church in South Street, Lancing. To order tickets for the performances please contact 01903 762793 (leave a message), email theboundstonechorus@gmail.com or buy online at https://www.trybooking.co.uk/MEX

Hello Thank you so much for the pledge you have made towards our smuggling community musical project. We're nearly there and the deadline is today! As we're a registered charity, we may be able to claim Gift Aid on your donation. If you’re a UK taxpayer and would like us to collect Gift Aid on your donation, then please email theboundstonechorus@gmail.com with your house number or name, postcode, and confirmation that you are a UK taxpayer and would like The Boundstone Chorus to claim Gift Aid on your pledge/donation. To be eligible you must pay the same amount (or more) UK Income and/or Capital Gains Tax as the total donations you make to all charities in a tax year. Claiming this extra money on top of your pledge will enable us to create a photographic archive of every stage of the project which will be made available to each performing group and help with future promotion of the musical. We will also look to record the first performance and work with a local historian who will give a talk about smuggling. Our first performance date is now set for Saturday 22 June in St Michael and All Angels Church, South Street, Lancing. We hope to see you there. Thanks again for your support! Aedan Kerney and Ian Tout 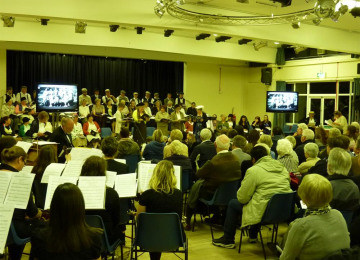 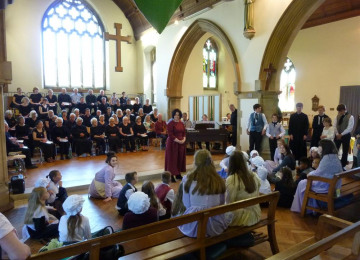 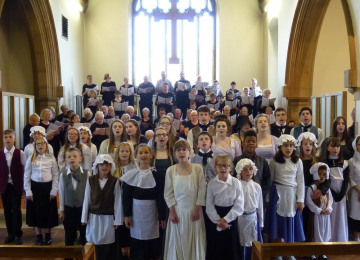 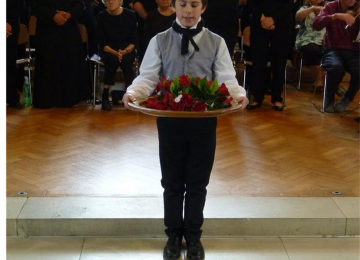 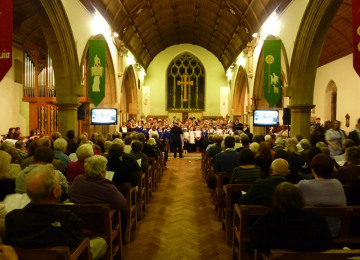 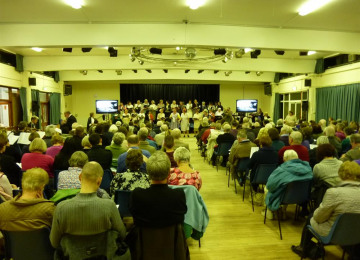 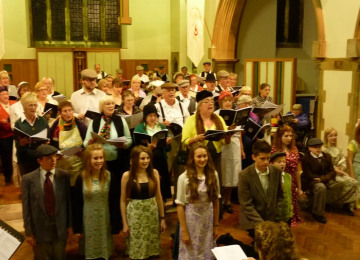 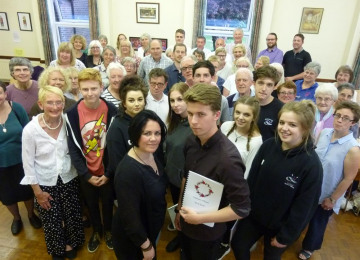 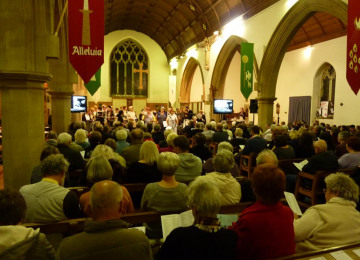 The Boundstone Chorus, a 65-strong community choir, has been performing for 35 years. In that time they have performed a wide range of music from Elgar’s “Dream of Gerontius” and Fanshawe’s “African Sanctus” to L’Estrange’s”Ahoy! Sing for the Mary Rose”, presenting at least three concerts annually. Recent Concerts have included “Eternal Light” by Howard Goodall and “The Peacemakers” by Karl Jenkins.
One aspect of the choir’s developing work has been to sing in a dramatic context, mixing “concert-performance” and “musical theatre” styles in two highly successful original community musicals to sell-out audiences. In 2015 it presented “To Harvest the Dream”. Based on the struggles of the Lancing community between the wars with the move from horticulture to industry with the coming of the Southern Region Carriage Works it tapped into the memories of older members of the community. Originally created by Aedan Kerney and Tom Brown in 1990 for secondary school students, it was rewritten as a community musical in 2015 for 150 performers from The Boundstone Chorus, the local secondary school, a primary school, local instrumentalists and actors and was presented in both Lancing and Shoreham. In 2017 The Boundstone Chorus led the revival of a second Aedan Kerney / Tom Brown musical, “Catherine of Eyam”, based on the experiences of the Derbyshire plague village in the 17th century. Using similar community forces it challenged audiences to consider the nature of what community is. This time it involved considerable writing and rewriting of the music.
The Choir has collaborated with musical groups from local schools, adult groups: Worthing Philharmonic Orchestra, Lancing Brass, Worthing Choral Society and composers James Olsen and Aedan Kerney.

Project Owner: Ian Tout The Project Owner takes legal responsibility for receiving and spending the funds raised and ensuring the project is delivered.