2021 sees the 550th anniversary of the Battle of Barnet (14th April 1471), a decisive encounter in the Wars of Roses in which the Yorkist army of Edward IV defeated the Lancastrian forces led by Warwick ‘the Kingmaker’. Barnet Medieval Festival will mark the 550th anniversary with a special two-day programme of events, featuring re-enactments of the Battle of Barnet and the Battle of Tewkesbury, which was also fought in spring 1471. It is planned that the Festival will take place at Barnet Elizabethans RFC on the weekend of 11th and 12th September 2021, subject to government guidelines on social distancing and large gatherings. If it does not prove possible to hold the Festival this year, we will stage the 550th anniversary festival in summer 2022. Any changes will be communicated through this page. The Festival provides the whole community with a great day out and offers many opportunities for the public to learn about medieval life and the history of the battle itself.

The Festival provides the community with a great day out and many opportunities for learning about medieval life as well as the history of the battle itself. At the heart of the event will be a living history encampment where the re-enactors and their families live as our ancestors did in the 15th century. This is one of the most educational aspects of the Festival as the re-enactors demonstrate everything from how they made their clothes and weapons to the kinds of food they ate. There will also be gunnery and archery displays, cookery demonstrations, music, dance, a medieval market, children’s activities and a series of talks by experts about medieval life and warfare. Food and drink stalls will also be on site. Barnet Medieval Festival is London’s only medieval festival of its kind and engages people in the history of the Battle of Barnet and its significance within the Wars of the Roses. Barnet is unique as it has the only registered battlefield site in all of Greater London.


This will be the second Festival put on by the Barnet Medieval Festival Committee. The first, in 2019, was a great success and attracted over 8,000 visitors, as well as coverage by the BBC. We had planned to hold a Festival in the summer of 2020 but, like so many other events, it had to be cancelled due to Covid-19. However, the same experienced Festival committee is ready to stage a bigger and better Festival to commorate the 550th Battle of Barnet, assuming we can find sufficient funding. 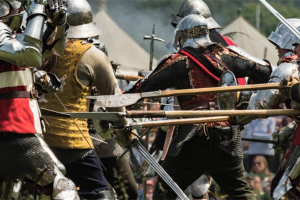 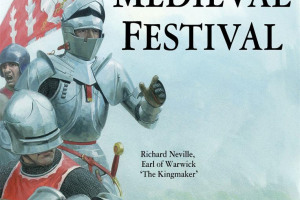 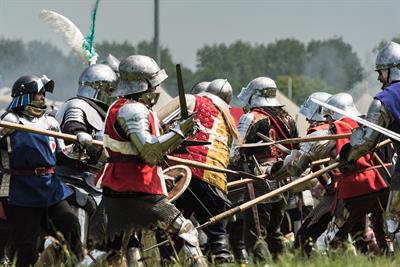 'The tremendous support shown by the London Borough of Barnet's pledge to the Battle of Barnet 550 Campaign has provided a fantastic boost to our project. It not only recognises the positive benefits of the Festival to the whole community, but it will give confidence to other potential supporters that we will put on an educational, fun, and exciting event!' 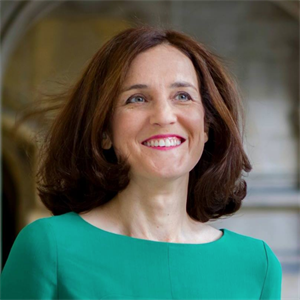 MP Theresa Villiers has highlighted the 550th anniversary of the Battle of Barnet in Parliament today to make the case that cultural events can help town centres recover from the pandemic. The battle in 1471, during the Wars of the Roses, was a victory for Edward of York (King Edward IV) over the House of Lancaster led by Richard Neville, Earl of Warwick (the Kingmaker), and it took place just north of what was then the small village of Barnet. Theresa told MPs the official site of the battle is the only one in the country to which people can travel by Tube and the only registered battlefield in Greater London. Recent work to identify the exact location of the battlefield has so far proved inconclusive; but it may turn out to be somewhat further north than the Hadley Green/Old Fold/Hadley Highstone site previously believed to have been where the fighting took place. Barnet was the first battle in Britain to see the widespread use of handguns and the victory for Edward IV helped cement his efforts to build a more modern state by curbing the power of magnates. “I am pleased to say that the most important reason of all to mark the anniversary is to promote Chipping Barnet and encourage people to visit our local town centre," she told the Westminster Hall debate. “Heritage related tourism can play an important part in helping our high streets thrive. “Once life returns to normal, I warmly encourage people to come to walk around the traditionally recognised battle site. Hopefully visitors will also stop off at some of Barnet’s excellent hospitality businesses, as indeed some of the victorious Yorkist troops apparently did after the battle. “Even before Covid, local town centres right across our country had had a tough time as competition from online retail giants has intensified. But high streets are a crucial part of our community and we must find ways to ensure they survive.” Theresa also said she continues to campaign to secure Government support for insurance for events like the Barnet Medieval Festival, which was cancelled last year but will hopefully take place on the 11th and 12th September. “Many who are trying to put on events this summer are finding it difficult or impossible to get insurance,” she explained. “We risk a further summer of cancellations if this problem isn’t resolved. So, I would urge Ministers to provide same kind of support for festivals and events as they have already given to the TV and film sector - for the sake of economic recovery, to signal that the UK is open for business again this summer, and to enable families to have some memorable days out after the toughest 12 months any of us can remember.” During her speech, Theresa encouraged people to pledge donations on Barnet Medieval Festival Spacehive page at: www.spacehive.com/battle-barnet-550 At the start of the debate, Theresa expressed her support and sympathy to all those affected by the pandemic as the nation reflects on one year since the start of the first lockdown. She joined other MPs in the Chamber of the House of Commons at noon for a minute's silence to remember the victims of the outbreak. 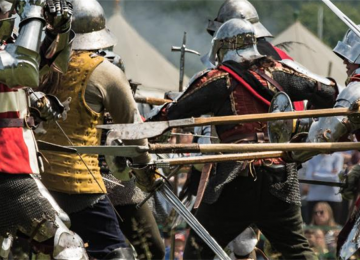 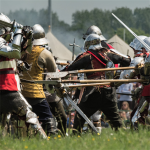 Barnet Medieval Festival is organised by the Barnet Medieval Festival Committee (BMFC), a registered charity formed with the aim of advancing the education of the public in the history of medieval life and warfare, with a focus on the history of the town of Barnet. It took on the role of organising the Festival from the Battle of Barnet Partnership (Barnet Museum, The Barnet Society and The Battlefields Trust), which delivered the Battle of Barnet Project funded by the Heritage Lottery Fund.

The BMFC’s primary activity is to develop, organize and deliver Barnet Medieval Festival, a historical re-enactment event commemorating the Battle of Barnet - a pivotal event in the War of the Roses.

In addition, the BMFC also expects to mount other events and activities that relate to the anniversary of the battle, which took place on 14 April 1471, and the wider history and heritage of medieval Barnet.

The five trustees have expertise in organisation, event management, history, merchandising and fundraising. They have already run a successful Festival in 2019, despite appalling weather on the first day! Our local patron, Martin Russell, who as Deputy Lord Lieutenant, as well as the incoming Grand Master of the Farriers Company, has been invaluable in developing our links with the City and other supportive organisations.

To raise funds for the Festival, we have launched a range of specially designed merchandise which is available to purchase from our online shop: https://barnet-medieval-festival.sumup.link/

We are grateful to all our participants, visitors and volunteers for their continued support and we look forward to gathering together again.