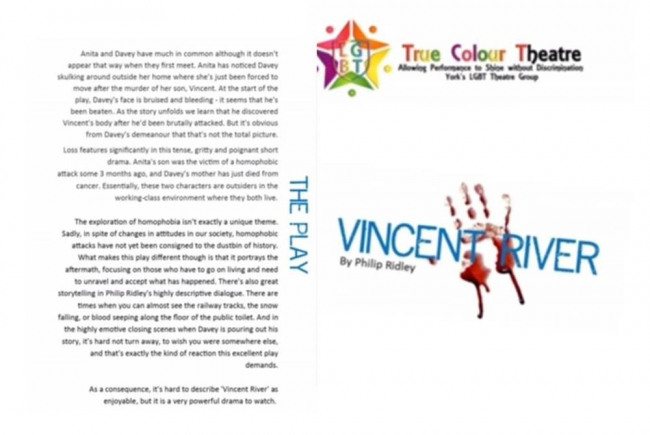 Vincent River is a one act stage play by Philip Ridley; his fourth stage play for adults and premiered at the Hampstead Theatre, London on 6 September 2000 where it starred the late Lynda Bellingham

Vincent River is a one act stage play by Philip Ridley; his fourth stage play for adults and premiered at the Hampstead Theatre, London on 6 September 2000 where it starred the late Lynda Bellingham

The story plays out in realtime and is set in a rundown flat in Dagenham. There a woman called Anita is moving in following the death of Vincent, her son who was killed in a homophobic attack which resulted in her discovering that he was a homosexual in the aftermath of his murder. In the play we see her interact with Davey, a boy who claims to have been the first to find Vincent's corpse and who wants to know as much as he can about Vincent from Anita. It is a powerful and extremely gripping piece of theatre that brings to light the issue of Hate Crime in the LGBT community. It has heart but it punches you in the gut with its raw and emotional dialogue. This play highlights the brutal existence of LGBT Hate Crime in today's society and I want this to work alongside the constant work the Police do in communities to encourage LGBT people to come forward and not be afraid to report hate crime.


One in six lesbian, gay and bi people have experienced a homophobic or biphobic hate crime or incident over the last three years - and yet the reporting is next to 0. North Yorkshire Police do a fantastic job in raising the profile of hate crime and it is important that people feel safe and comfortable to come forward. This play outlines what happens when people don't come forward and the repercussions on loved ones left behind and the media portrayal in society.

How will the money be spent?Total £598