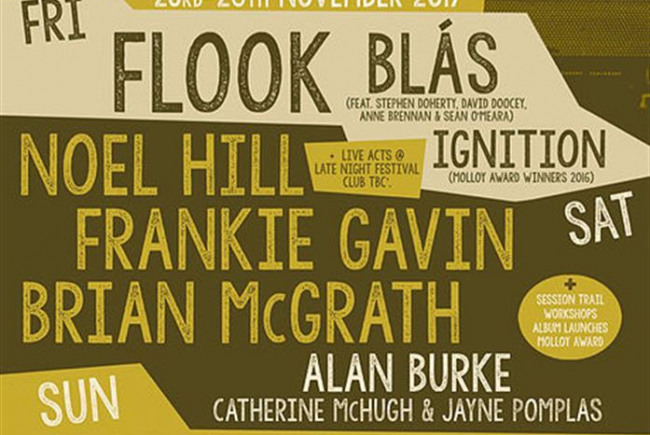 Not for profit organisation set up in 2013, with an aim to encourage, promote and drive Irish music and culture into the Irish community already within the Birmingham area, and to positively impact on the younger generation of Irish also to put the city on the map as a hotbed of young up and coming talent in both music and dance. There are events linked to the festival all year round, such as the Molloy Summer School, Schools project where musicians will give masterclasses at schools who are interested, there are also year round music and dance workshops for both the new and experienced, old and young.

This is a local idea, dreamt up and organised by a young local committee of young (mainly under 30 anyway) musicians to try and prevent the withering away of traditional Irish music in one of the UKs main immigrant centres. That goes hand in hand with promoting a positive, fun and rewarding social activity/pastime/career for anyone who cares to join in. This is not exclusive to the Irish community, and similarly to the St Patricks Parade in the city, there are plenty of example of non-irish musicians and bands taking part. The festival also attracts fans from right across the globe, in particular North America and Australia. A secondary impact but no less worthwhile is that on the pubs, clubs and bars that are used as venues for the festival, and the eateries and accommodation providers that provide hospitality. Our aim is to make this the single biggest Folk Festival in the UK - which is nothing less than Birmingham deserves.


All committee members are passionate musicians in their own right, most have played at various festivals around the UK and Europe. All have a history of volunteering and teaching music and dance in the locality, and this festival is a natural progression for them. There is no intention to make money here, other than to re-invest in creating more opportunities for irish music to foster and grow - whether by growing the festival, more bands and venues more community programmes or expanding out of Birmingham. The Tradfest was brought together in late 2013 by 4 young local musicians who realised that the music and culture that they loved and that had been prevalent in the city for 60 years or more, was slowly dying.  The festival and associated events was born with the express intention to prevent this happening, and to inspire a new, young and vibrant generation of Brummies to get involved.  Clearly the main focus has been the Irish element, but as per the stereotype, all are welcome.

The Tradfest is now involved in running school programmes, music workshops and dance sessions outside of the main festival programme.  Ultimately the aim is for this to be the biggest UK folk music festival, and as a secondary aim to provide a platform for local talent to come through and promote their talent to a worldwide audience.

Project Owner: Birmingham Tradfest The Project Owner takes legal responsibility for receiving and spending the funds raised and ensuring the project is delivered.