Chipping Barnet is re-establishing its identity as a historic market town by reconnecting with its medieval past to create a sustainable community festival that is integrated with the whole town.

Chipping Barnet is re-establishing its identity as a historic market town by reconnecting with its medieval past to create a sustainable community festival that is integrated with the whole town.

Chipping Barnet is home to London's only registered battlefield (Battle of Barnet: 1471), but it also has enjoyed a long history as a flourishing market town, providing hospitality, produce, and trade to travellers on the Great North Road. With this bid we will revive this tradition of hospitality and trade, celebrate what is special about Barnet and boost the local economy by building on the success of the previous years' medieval festivals. The Town Team, along with the Partnership that delivered the successful Battle of Barnet Project, will transform the town centre by bringing back the bustle and buzz of medieval times. In June 2019 we shall organise a weekend of medieval activities, providing a shuttle bus to link the festival site with the town centre. By creating opportunities for local artisan producers to sell their goods, for town traders to dress in medieval costume, for people to volunteer and learn about medieval life, this project will bring the community together.

The Medieval Festival started in a small way in 2017. In 2018 it attracted over 6000 people but was separate from the town centre. Interviews with visitors this year emphasised the need to bring the communities together to boost the local economy. This project will promote local traders at the festival site as well as the town centre, providing a market-place and shopfront for their goods. The unifying medieval theme will attract more visitors. It will also generate many opportunities for people to volunteer and to connect with each other. In the months leading up to the Festival, we will provide workshops for people to learn about medieval food and costume and to take part in a community craft activity - the bendes of Barnet - to create heraldic household badges to be worn by the re-enactors. Local schools will be invited to each support a household and join in the craft activity. Local groups will organise talks, walks, musical events and art displays on the Festival weekend.


The Battle of Barnet Project, run by the Barnet Museum, Barnet Society and the Battlefields Trust, has delivered a range of different community activities to raise awareness about the Battle of Barnet, a decisive encounter during the Wars of the Roses. The culmination of the project was the Medieval Festival, a community event which attracted over 6000 visitors to the Festival site and was enthusiastically welcomed by the public. The success of this event has meant that there are expectations that it could be held again, but better integrated with the town centre. This demand has spurred the Town Team to devise ways to deliver a town-wide Medieval Festival and hence to put together this application. Our town has taken longer than many to recover from the 2008 recession. At present, alongside other developments, the Town Team in association with the Partnership is keen to develop Barnet as a historic centre. Costs are based on estimates from the internet, quotations and local sources. 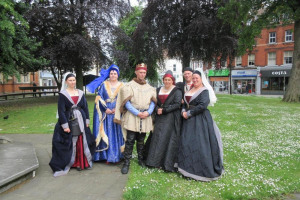 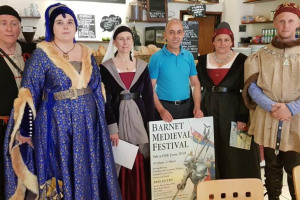 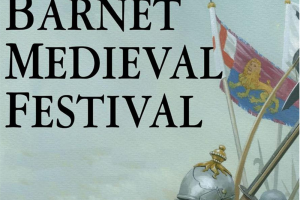 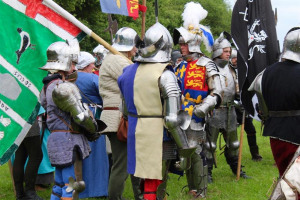 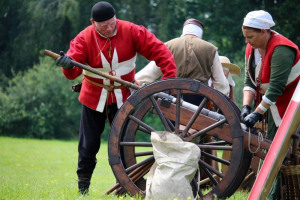 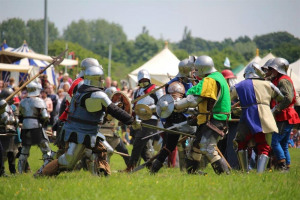 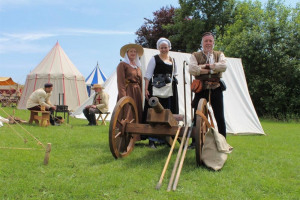 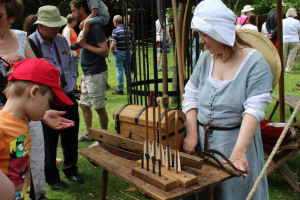 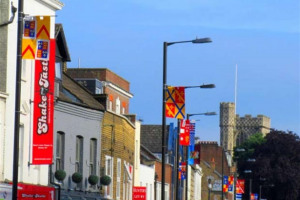 Two main sites: the Festival site at Byng Road and the Town centre, linked by events and a free shuttle bus (which will also include a stop at High Barnet Station 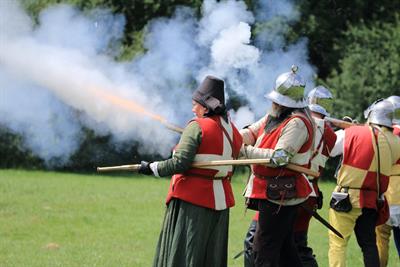 As I write, we are two days way from our deadline - but still with too much money left to raise. This site will shortly close and your pledge will not be collected (but read on!). We did do well and we are not despondent, despairing or any or "des" word you can thnk of. Far from it. We have received tremendous support from everyone who pledged and also from all those people who sought us out in the town - especially at the recent Christmas Fair - to tell us what you thought, and especially what we could do better next year. We are also deeply touched by the enthusiasm of the re-enactor community for their super-enthusiastic embracing of our "new" festival. They are spreading the word and are determined to make a success of Barnet Medieval Festival 2019. So we will relaunch in the New Year with a new slimmed-down Crowdfunding drive. If you pledged this time, please do so again - and tell all your friends, colleagues and acquaintances about it. We look forward to seeing you in early June 2019! Susan & Bob (Barnet Medieval Festival)

Good Day to you all. Firstly, thank you for your support for our project. You will see that we still have quite a way to go if we are to reach our target by the 9 December deadline. Sadly, on this occasion, the GLA team did not pick us as a project for their pledges. However, there has been some interest shown by Barnet Together, and we are also making contact with other possible philanthropic organisations. And this is where you could help - in at least two ways: 1. Do you know of any fund holding charities or private philanthropists, who would find the idea of a community event like ours worth supporting? 2. If we fail to reach our target by 9 December, you will not be asked for any money through this site. But we do not intend to give up. We are very keen to see the Medieval Festival estalished as an eagerly anticipated annual event, even if we cannot grow as quickly as we'd like to. So, if you would still like to be involved: as a possble donor,a receiver of occasional newsletters or potential volunteer - please email me (bobburstow@btinternet.com) using BMF (Barnet Medieval Festival) as the subject line and I will then add you to the mailing list. Please note that this is the only way we can continue to be in contact with you, should our Crowdfunding drive not meet its deadline. Looking forward to hearing from you soon. Regards Bob Burstow and Susan Skedd BMF 2019 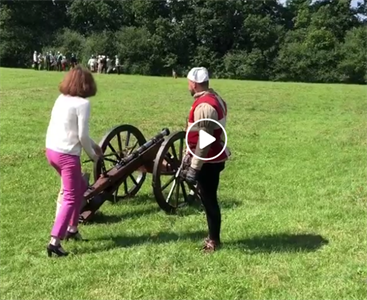 A quick note to thank you all for your efforts to date. Over 60 supporters and £1000 in local donations is a very good start. Next week is when Saddiq Kahn's team will be looking at how we have done, to decide if we will benefit from any of the big money that the Greater London Authority will be giving. So for this week, please tell eveyone about the project and urge them to get online and pledge £2.00 - only the cost of a coffee - to show willing. Pledging is at bit.ly/BMF-2019 and remember - you could be picked to fire a cannon on one of the festival days. If Theresa could do it last year then so can you! (Click on this kink to see her in action: https://www.facebook.com/theresavillierscb/videos/1046471935511258/ 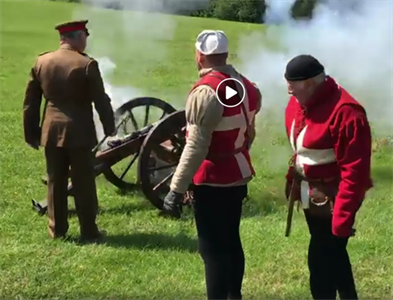 Now every pledge made backing the 2019 Festivl will count as one entry in a draw to fire a cannon in June 2019. The chance of a lifetime! 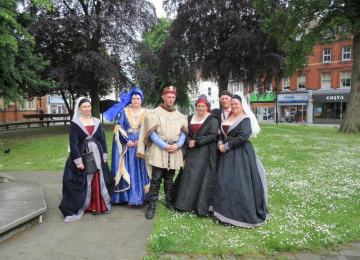 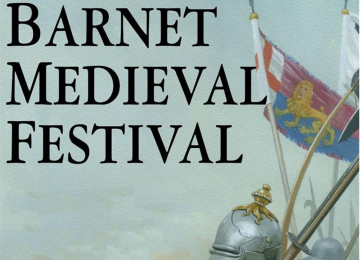 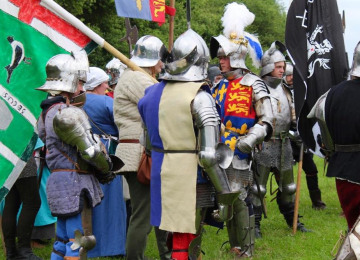 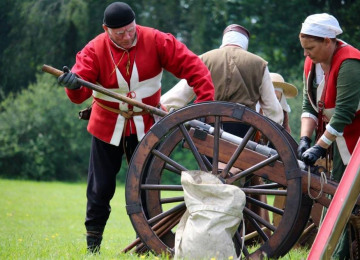 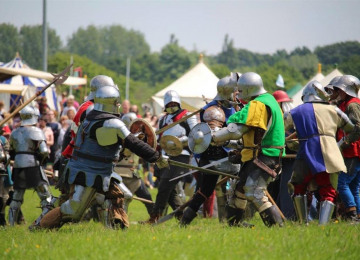 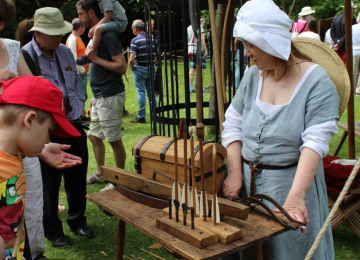 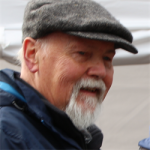 Chipping Barnet Town Team is made up of the 5 main community groups in town plus Barnet College, a local Councillor, a senior council official and other stakeholders. The groups worked with the Council in 2009/11 to produce a Town Centre Strategy with an action plan. We have since undertaken projects to fulfil these committments including: the redesign of the church garden (now the Town Gateway), the first phase of the greening of the High Street, renovatkion of local independant traders' shopfronts, the monthly Barnet Teenage Market, and ongoing proposals  for pavement buildouts along the High Street. We have had some successes since our founding and are growing in confidence and skill.

We have a vision for Chipping Barnet as an aspirational retail destination and community space. It is an old market town and has many positives.

Sadly the Hiigh Street has lost its identity, especially since 2008,  with a high vacancy rate, high churn and a plethora of charity shops. It is not sufficiently attractive to new retailers. We are trying to work with existing traders, landlords and borough officers to encourage the High Street to return to being seen as an enthusiastic and attcative destination for local residents and visitors alike. This project will provide an exemplar of what can be done.