London Bus Cafe come and help set up and then dine on a Beckham Burger at London Bus Cafe in the heart of Wembley directly opposite Wembley Stadium and soon to be opened London Designer Outlet,

London Bus Cafe come and help set up and then dine on a Beckham Burger at London Bus Cafe in the heart of Wembley directly opposite Wembley Stadium and soon to be opened London Designer Outlet,

An area of land known as Pop Down Square is being offered on a 5 year rent free basis adjacent to Wembley Stadium to transform into a vibrant area for visitors to be entertained in a central feature of an amphitheatre. In order to attract visitors as part of our proposal for the Pop Down Square space we are proposing to location an old Routemaster bus and transform it into London Bus Cafe as a central cafe. As well as providing an interesting visitor experience unemployed people will be trained at the cafe providing new employment opportunities for local people.
As the Wembley arch is an iconic London feature positioning an Old Route Master bus with the Wembley arch in the background can only but captivate and endear visitors to Wembley. The area would have high footfall during events days being a gateway to Wembley Stadium

Over the past 10 years Wembley stadium area has been a major building site during phases of construction from Wembley Stadium, a number of new apartments and hotels including the new Hilton together with new buildings nearing completion such as Brent Civic Centre and London Designer Outlet.
Sadlyas visitors enter Wembley Stadium area from either Wembley Central and or Wembley Stadium stations are greeted with derelict land that is currently awaiting future redevelopment.

The overall project Pop Down Square is offering an opportunity to transform a section of land adjacent to Wembley Stadium Station into a vibrant and welcoming area for visitors. As part of the 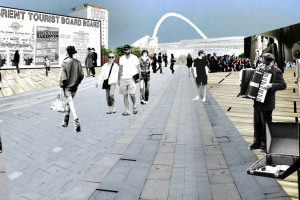 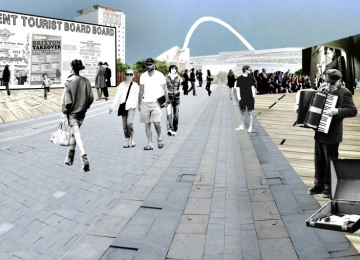 London Bus Cafe is proposing to to transform an old Route Master Bus into a Cafe and locate as part of a central feature in the recently offered space known as Pop Down Sqaure next to Wembley Stadium. Please note the example pictures are used as an example of a similar project in Brick lane London, but at this stage there is no connection to the Brick Lane London Bus and no attempt to suggest otherwise is intended.

The area known as Pop Down Square is currently being offered with 2 triangular sections of Land on a 5 year rent free basis to develop into a Community Space. Further details of Pop Down Square can be viewed