By The Pimlico Foundation City of Westminster Create

By The Pimlico Foundation

We wish to provide reusable cups to the community who attend our Hot Chocolate outreach, we are giving out over 200 polystyrene cups every week. We wish to stop rubbish and cups going to landfill.

We wish to provide reusable cups to the community who attend our Hot Chocolate outreach, we are giving out over 200 polystyrene cups every week. We wish to stop rubbish and cups going to landfill.

The Pimlico Foundation has been running an outreach project on the Churchill Garden Estate and Ebury Bridge for over 3 years now on a weekly basis. The youth facing name of the project is 'Outbreak' as we hope for an 'Outbreak' of love in the community. We did this to engage with young people in the community as no one would hang out in the square or in the area, through fear of gang issues. We decided to run a hot chocolate stand as it was November 2017 and we thought it would be a good way to speak with young people and parents by serving the community with love. The first week we gave out 20+ cups and last week we serve 200+ cups, this happens every week. The issue is the polystyrene cups take thousands of year to break down, so we introduced collapsable cups to try and irradicate the polystyrene cups, we needed £1550 to purchase 250 cups, so we can give out more cups at an affordable price £2, to prevent cups going to landfill and stop the rubbish been left behind.

As explained above having collapsable cups, will stop the possiblity of 200+ cups going in the bin that will end up in landfill, also children like to bite the cups and leave bits of polystyrene on the floor which animals can swallow and it can cause blockage in an animals throat. We also clean up around the square when we are finished but some of the people will take the cup from the project and walk off home with it and discard it on the road, so I beleive we could also limit the rubbish created from such a marvellous project.

Creating amazing places for all people to live, work and visit 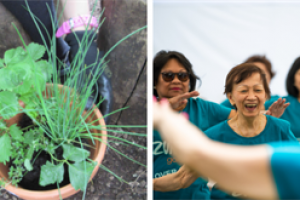 Outbreak has been established as part of the Pimlico Foundation, a Christian charity which strives to create positive futures for young people living in Pimlico, central London.

Project Owner: The Pimlico Foundation The Project Owner takes legal responsibility for receiving and spending the funds raised and ensuring the project is delivered.