To cast my driftwood horse sculpture in bronze as a War Horse memorial and erect it in Priory Park Chichester. I am initially asking for funds to cast the sculpture in resin. The sculpture will be a tribute to the thousands of horses sacrificed in WW1 and other conflicts. It will be an educational tool and a catalyst to raise funds. An on-going project will be based around the sculpture to educate children on the role of the horse in warfare throughout history.The sculpture will educate future generations on our long standing relationship with the horse; celebrate and preserve the history of the war horse and its role in shaping civilisations and changing lives.

The horse will be unique and will attract a lot of interest and publicity and act as a permanent reminder of the sacrifice paid by these animals alongside the brave men and women in WW1.It would make a wonderful visual centrepiece around which to tell the history.


A bronze sculpture of a horse will be a striking permanent asset to a high profile park and enhance the status of Priory Park as a memorial park. 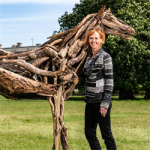 Priory Park Society consists of the Friends of Priory Park who look after the park and organise events in the park. The park was gifted to the people 100 years ago at the end of the war as a memorial. The park is now owned by Chichester District Council. We are running this campaign because a War Horse memorial will be a permanent asset and enhance the status of the park as a memorial park. It will act as a reminder of the millions of horses who died in WW1 and the tremendous debt paid by them alongside the millions of brave soldiers. It will be a fitting tribute as the locality is steeped in horse history and there is no memorial to the War Horse in this area.