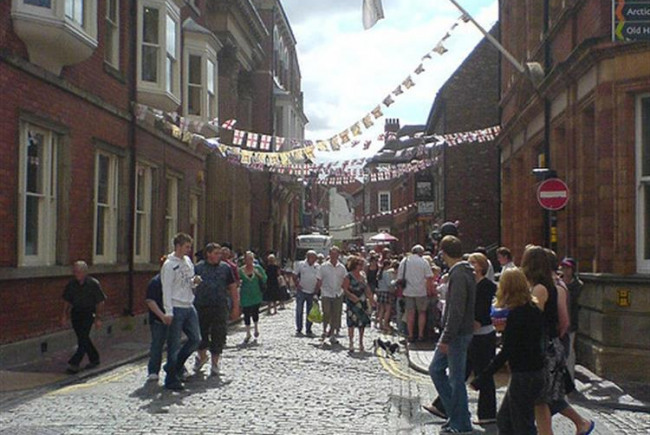 Help to create The Freedom Trail, a weekend pop-up event that will increase footfall to Hull's cultural quarter, using live entertainment, craft stalls and other arts interventions to draw people in.

Help to create The Freedom Trail, a weekend pop-up event that will increase footfall to Hull's cultural quarter, using live entertainment, craft stalls and other arts interventions to draw people in.

The journey via High Street and beneath the Myton Bridge is already the perfect route. However, not enough people are aware of this alternate method of crossing Hull’s busiest road. Imagine if that route was lined with entertainment to guide the way to Hull’s rapidly expanding cultural quarter.

Although alternative footbridges will eventually materialise as part of the long-awaited £150 million upgrade of Castle Street, heading under Myton Bridge is a great option for those en route to Fruit, Kingston Art Gallery, The Deep, Fruit Trade Music, Eleven, Thieving Harry's and the like.

By lining that route, High Street and Myton Bridge will serve as a wayfinder system whilst businesses and museums on those streets will also benefit from the increase in footfall.

An endless stream of artists, craft stalls, buskers, colourful street art and entertaining street performers. You don’t know what’s coming next, except that it will be, by turn, exciting and enthralling.

The Fruit Market area is a hotbed of cultural and artistic activity. The area is exactly the right place in which an artistic community can flourish and grow.

However, there is a misconception that Castle Street is impossible to traverse.

Who said Castle Street was impossible to traverse? That passage to this side of the city was difficult?

The Freedom Trail is the perfect solution to engage with potential audiences and lead them towards the feast of culture on offer in the Fruit Market.


Here is a unique, unpredictable location. A stage here, a stall there, a captivating movement piece to your left, a juggler on stilts to your right, a short play being performed straight ahead, a band playing round the corner. And, all the while, you’re inching ever-closer to the Fruit Market.

Dave Windass is a writer based in the city of Hull.

Dave is a director of theatre company Ensemble 52. For E52, he co-produces the Heads Up Festival, produced in partnership with Battersea Arts Centre. He co-founded arts venue and E52’s base The Other Space (now Kardomah94) in 2013. He founded the long-running theatre development night Scratch@Fruit in 2010. He was a founder member, in 2003, of Hull Truck’s Blockheads, which aimed to develop and explore skills in writing for the stage.

As a journalist, he wrote countless articles for a host of publications. He was a theatre critic for The Stage and whatsonstage.com, arts correspondent for Artscene and a regular contributor to The Big Issue in the North. He was a lecturer at Hull School of Art & Design from 2009-2014.