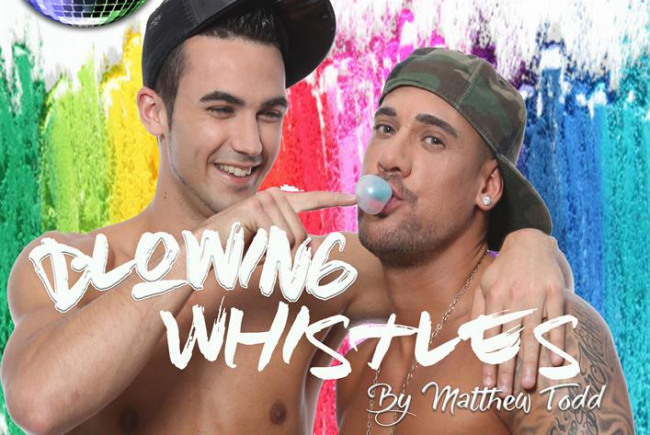 The play follows three gay men, two in a relationship and one whom the couple meet on-line on Gaydar. Some issues the characters go through include commitment, immaturity, and sexual identity

The play follows three gay men, two in a relationship and one whom the couple meet on-line on Gaydar. Some issues the characters go through include commitment, immaturity, and sexual identity

Blowing Whistles is a two-act theatrical play written by Matthew Todd, the current editor of the UK's best selling gay magazine Attitude. It centers on gay culture and the difficulties it presents gay men. It had a first run in June 2005 at the Warehouse Theatre, Croydon, where it was directed by Phil Willmott. Following this it was performed at Sound Theatre off Leicester Square, London in 2006, and has since seen productions in Sydney, Melbourne, Adelaide, Fire Island (New York), Boston, Palm Springs, Fort Lauderdale, San Francisco, Toronto and Vancouver. It returned to London transferring to the Leicester Square Theatre in 2008 in a production by Jonathan Altaras, directed by Pete Nettell who directed the Sydney production. It received overwhelmingly positive notices from such diverse publications as the gay press through to the right wing Spectator. The London Evening Standard compared it to Henrik Ibsen's A Doll's House, and The Stage compared it to the work of Larry Kramer.

The play is widely recognised as giving the illusion of being a light gay comedy in the first act before taking a darker, powerful turn in the second. This play will highlight social inclusions that LGBT people encounter in todays society.

Blowing Whistles has now been cast and they 3 actors are ready and waiting to start rehearsals. The artwork has been completed for the posters and marketing materials. The venue is on hold and the license has been approved we just need to start raising some funds to get it completed.

How will the money be spent?Total £974