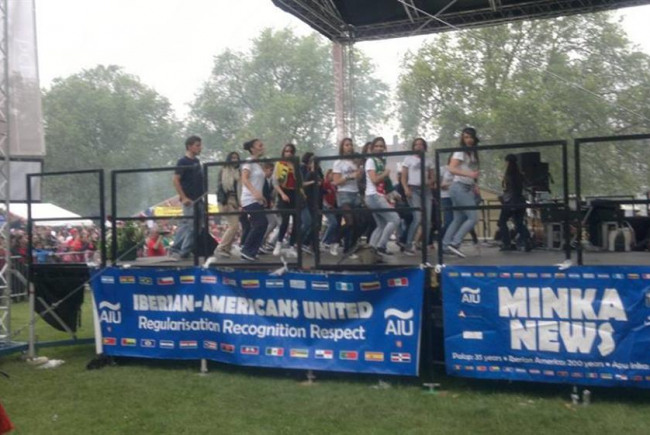 Every year the Spanish/Portuguese speaking community organize its own history month. It is the Amigo Month when London celebrates its largest ethno-linguistic minority.

Every year the Spanish/Portuguese speaking community organize its own history month. It is the Amigo Month when London celebrates its largest ethno-linguistic minority.

From September 7 to October 12 there are 35 days where all the around 35 Luso-Hispanic countries have a national date to commemorate. In those 5 weeks we remember the contributions, culture, food, music and heritage of 5 million UK’s Iberian-speakers. There are mainly 5 areas where the Amigo community has a strong presence: Elephant and Castle, Vauxhall-Stockwell-Brixton, Willesden Junction, Portobello and Tottenham. We want to take the opportunity of the Amigo Month to promote social cohesion, integration and development in those places. In each of the five different weekends we would like to develop street festivals with music, dances, art exhibitions, films, plays, conferences, talks on the history of that community and its contributions to London. In 2019 we should try to educate Londoners on the importance of the 500 anniversary of the first circumnavigation of the world made by Iberians in 1519-1522, one that open the road to globalization and later on the British expansion.

In Britain the LGTB and Black History Month have helped to integrate minorities into our society and to encourage everybody to feel proud of them. Since the Hispanic Legion and Hispanic Emperors Trajan and Hadrian were in the beginnings of London always our great city have a Luso-Hispanic community. It has contributed with its cuisine, music, businesses and workers to London, and we need to celebrate it. There are 850 million Spanish and Portuguese speakers worldwide (half of the Western Hemisphere) and these festivals encouraged cultural and commercial relations, while there are more than 1 million British that live or have properties in Iberia/Latin America. It promotes education of the Iberian languages and culture, more jobs and volunteering in so many activities, Londoners enjoyed Latin rhythms, it show the rich heritage of the Iberian/Latinos in London's history, it helps to develop some poor areas and it helps the environment promoting awareness of of the Amazons. The Amigo Month Committee is a non-profit community asociation that wants to promote the Latin, Hispanic and Lusophone communities and to integrate London.

Project Owner: AMIGO MONTH The Project Owner takes legal responsibility for receiving and spending the funds raised and ensuring the project is delivered.